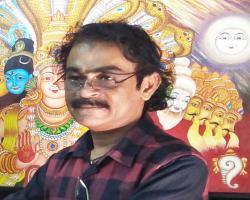 Mrs. Sangeetha Prince was born on 3rd May 1979 at Thonnakkal. She graduated in B.Com and Fine arts diploma in K.G.C. ( Colash fine arts, Attingal). She is married to Mural artist Mr. Prince Thonnakkal. They have a daughter, Kajol.

Though well versed in different styles, her interest is in mural and tanjore paintings. She perfected her skill under the able guidence of artists like Mr Prince Thonnakkal. She has participated renovation works at Kottayam Kumaranallur Devi temple , Neyyattinkara Krishna Swami temple and Kudavoor Mahadeva Temple with her husband Prince Thonnakkal. She also participated in a Mural paintig workshop and camp, conducted by Dept. of Tourism in 2000. Now she has an art gallery at Thonnakkal. Also she conducts classes for Oil, Acrilic, Water colour painting and craft works.